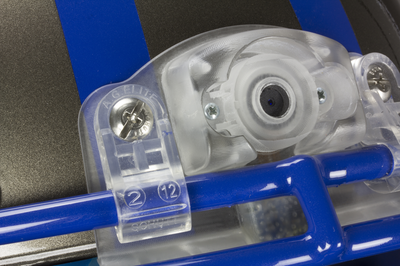 The idea of moving football fans closer to the action is nothing new.

Liverman’s company generated plenty of buzz at this month’s American Football Coaches Association Convention in Indianapolis announcing a partnership with Schutt Sports that will give players, coaches and fans a new look at football.

SVI has driven the design behind the new Schutt Vision – an AiR XP Pro helmet with a high definition camera placed where the nose bumper usually sits. A small electrical board is also encased on the back of the helmet. Schutt Vision is NOCSAE approved and passed all impact tests.

“From a coaching perspective, this is a valuable tool because you can see the moment in time that a player makes the decision to make a read and what they’re looking at,” Liverman said. “On the entertainment side, this is going to provide a vignette in coverage. TV cameras are always trying to get closer to the field and this will bring a player’s perspective.”

There are two versions of the helmet, one that records on an SD card and another with streaming video. The initial release will be the SD version and the streaming video is expected to be available in the spring. There are two small buttons on the back of the helmet that allow the camera to be turned off and on, and it can record for roughly 2.5 hours.

Schutt Vision will be made available to select teams in the spring.

Coaches at the AFCA show were already salivating thinking about the ways they could use the technology to their benefit.

“We were really happy with the amount of response we got at the AFCA show,” Liverman said. “The coaches immediately saw how valuable the footage was and were already talking about the ways they could use it.”

Schutt Vision is gaining steam quickly. An agreement has been reached with the Arena Football League to use the helmet in every televised game this season.

But don’t be quick to brush off the possibility that this camera angle could be the wave of the future as innovation often comes from outside the sport’s highest level.

Look no further than the Skycam, which came from small beginnings to become a staple in every major stadium in the country. ESPN recently showed the entire BCS National Championship Game from the Skycam angle as part of their enhanced coverage online.

“As a company, we want to continue to revolutionize the way in which fans experience sports,” Liverman said. “Can you imagine seeing some of these iconic plays – like the Immaculate Reception – not from a third person point of view, but from a player’s perspective?”

While other companies, like Go Pro and Contour, have had some success putting external camera on helmets, nothing has come close to Schutt Vision. But in the very near future, football will be closer to the fans than ever before.