Learn the differences between ski and snowboard jackets, to find the right winter jacket for sport.

At first glance, there really aren’t any. All ski and snowboard jackets are water-proof, durable, and great in the snow…and honestly, for most people the terms are pretty interchangeable. But for serious skiers and snowboarders, there is a world of difference between snowboard and ski jackets. Put them back to back, and these disparities quickly become evident. 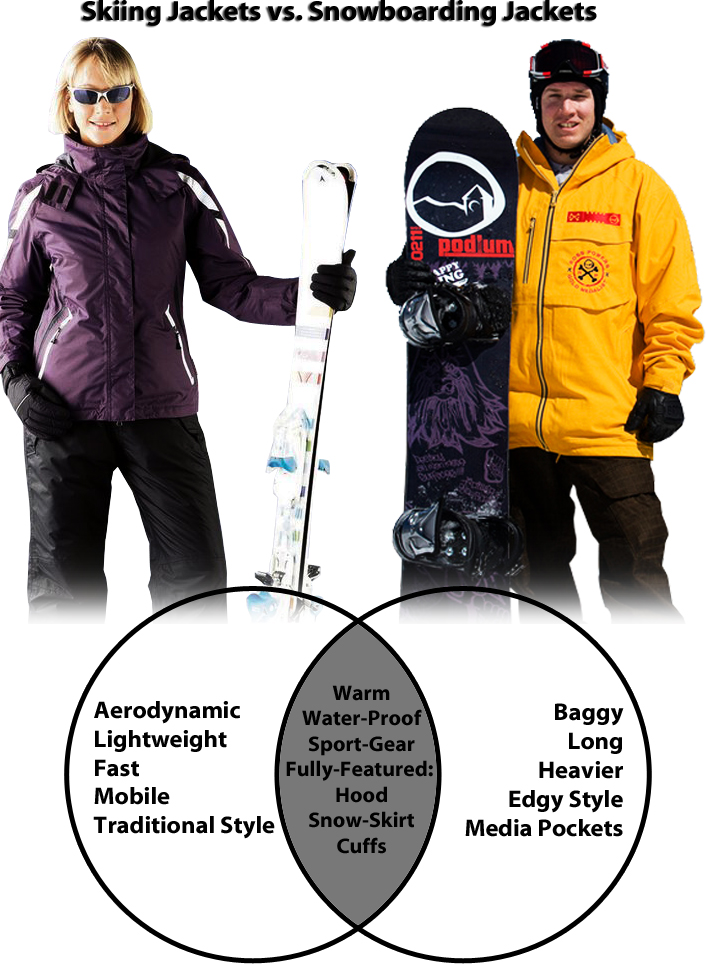 Ski jackets are typically more fitted shells, cutting down on excess material to improve speed and aerodynamics on the mountain. Style wise, most ski jackets are simply patterned, with bright and sometimes loud color combinations. They stand out, but don’t push the envelope, focusing on performance over bold style.

Snowboard and skiing jackets are different for two reasons; they’re aimed at different audiences, and they’re meant for different sports. 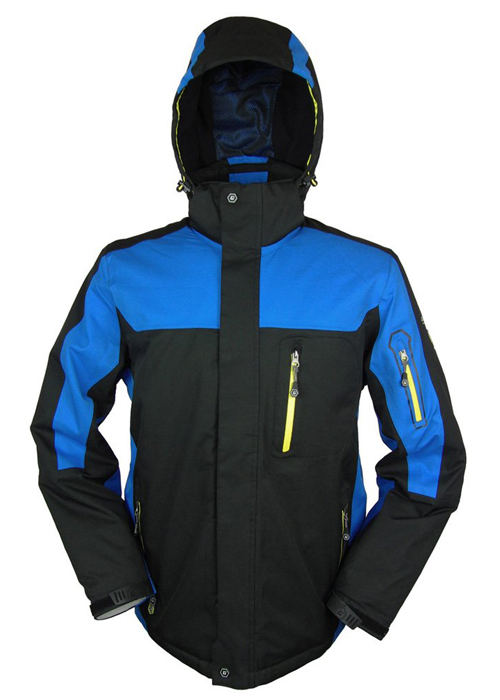 Skiing comes from a racing tradition, which has always focused on speed and finesse. Thus, you get bright colors, lightweight fabrics, and shorter hems in a skiing jacket. After all, skiers need extra mobility in both of their legs for better forward and backward movement. For most skiers, style is secondary to speed, mobility, and comfort, so skiing jackets try to deliver accordingly.

On the other hand, snowboarding evolved from skateboarding and surfing…two sports that have always been closely intertwined with style, street fashion, music, and fringe art. So it should come as no shock that snowboarding jackets feature boundary-pushing patterns and colors, modern media integration, and a more youthful look to them with long, baggy styles. 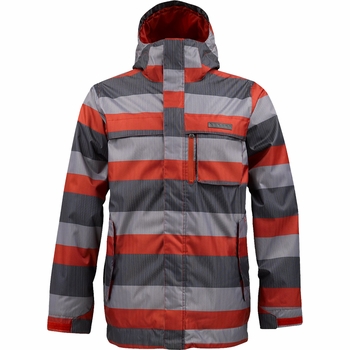 Performance wise, their bagginess and extra length are generally better for snowboarding as well, which is more park-oriented than racing specialized, focusing more on tricks, grinds, and grabs, than making quick runs down the mountain. Baggy jackets make it easier to move your arms and torso for tricks, and the extra length makes it more comfortable to sit on the snow in between heats.

You see the same differences in skiing and snowboarding pants. Traditional ski pants are straight hemmed, lightweight, and roomy enough to move in, but definitely designed for fast and active movement. Snowboarding pants, like snowboarding jackets, are baggy, heavier, more colorful, and lined with pockets and extras, for the more style-focused snowboarder. 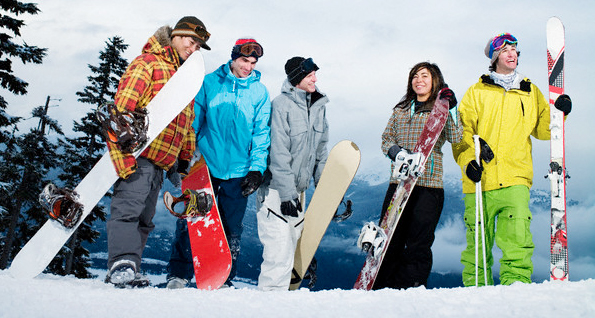 Ski and snowboard jackets are interchangeable for most people because generally, they do the same things and have a lot of the same features. Most are designed with similar water-proof shells, helmet-compatible hoods, adjustable cuffs, high collars, and most importantly, snow skirts, to prevent snow and ice from getting into the jacket. They both focus on keeping you warm, dry, and comfortable in the extreme cold of the mountain, and since both types of jackets are meant for active sport, they’re both performance-oriented.
At the end of the day, the differences between these two types of winter-sports jackets are negligible for most people, especially those just starting out. But since they differ functionally and stylistically, these jackets can definitely have an effect on your comfort and performance in the powder. For instance, if you’re a skier wearing a snowboarding jacket, it’s probably going to slow you down, catching the air like a sail and holding you back. Concurrently, if you’re a snowboarder wearing a skiing jacket, it’s probably going to be too tight for you to pull off any big grabs or tricks. All-in-all, it’s important to find the right jacket for your game before heading up the mountain.

Depending on where you live, you may have felt the effects of this year’s winter.  Here in the Greater Philadelphia area… 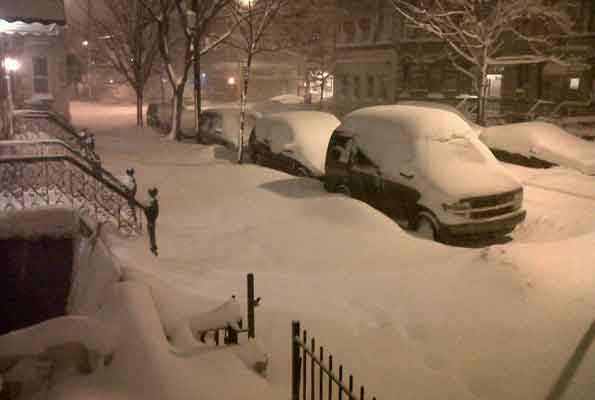 we have.  But there’s no reason to have the winter blues.  Instead, be a half-glass-full kind of person and embrace this winter gold.  Go skiing or snowboarding.  Try snowshoeing.  Me, personally?  I’m going skiing tomorrow at Jack Frost in Pennsylvania.  It’s much more fun playing in the snow than it is sitting inside miserably.

So if you’re near the mountains and are planning a ski trip, make sure to get geared up, because there is nothing worse than being unprepared for the snow.

Ski and Snowboard gear can be confusing, but that’s why we’re here.  That means layer up with thermals and baselayers, such as the popular Under Armour ColdGear Action Leggings. Wear a fleece jacket for warmth, such as The North Face El Cap Trek 1/4 Zip.  Then top it off with a waterproof ski jacket.

Equipment wise, winter gloves are essential (See: Harry, Dumb and Dumber).  And make sure to have waterproof gloves, because the only thing worse than being unprepared is cold, wet fingers while skiing or snowboarding.  Gerbing’s Men’s S-2 Heated Gloves, (yes, heated gloves) are a gift to mankind, as they can heat up to 135 degrees Fahrenheit!  A more economically wise choice would be the Gordini Men’s Gore-Tex Challenge XII Gloves which offer plenty of high quality Gore-Tex warmth and dry protection to fulfill your needs.

Neck warmers are a very underrated but important piece to the snow sport ensemble.  They provide warmth at a critical area of the body, the neck and mouth.

Lastly, a ski helmet and ski goggles are imperative to anyone who thinks their brain is a somewhat important bodily organ.  Back in the day, wearing a helmet while skiing or snowboarding might have been a big fashion no-no, but nowadays, its commonplace.  The negative stigma of wearing a helmet is gone; people have finally wised up.  Buying a helmet seems like a small price to pay to protect your BRAIN.

Ski goggles not only enhance your vision and protect your eyes from the wind, but they also look pretty sweet.

So get out of the house, gear up, and embrace the winter wonderland that mother nature has offered us.  And when you do go skiing or snowboarding, don’t try and act all macho by not getting the proper equipment to battle the elements.  Prepare yourself and get all the necessary equipment.

Or, you could just wing it, and end up like this guy: 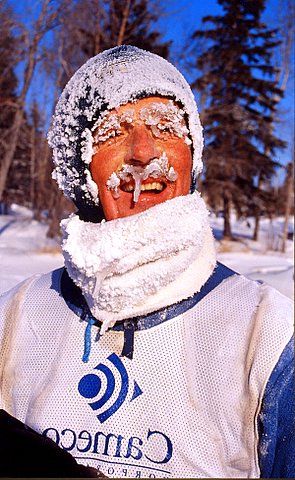