If golf is truly the game of kings, then it seams field hockey is now the game of Duchesses, at least as of Thursday. That afternoon, Kate Middleton, Duchess of Cambridge, took to the field hockey pitch in London’s Olympic Park to join the British Olympic women’s field hockey team in a practice for the upcoming 2012 games. 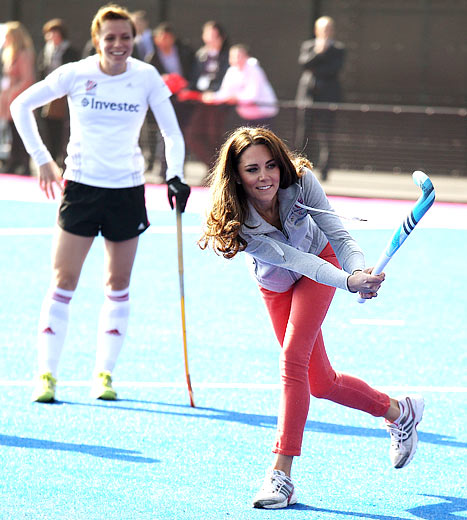 A former captain of her high school field hockey team, Kate admitted it had been awhile since she took a field hockey stick out for a swing. But once she changed out of her street clothes into some less glamorous sneakers and a sweatshirt (although she still decided to keep her skin tight coral jeans on), and started handling the ball a bit, she seamed to relax and let her old talents resurface.

“The last time I played was 2005, maybe. ” Middleton said. “It feels like I haven’t held a stick for 10 years. This is going to be so embarrassing. My brain thinks I can do all these wonderful things but my body just doesn’t play ball.”

Playing, laughing, and shooting around with the British field hockey team and Olympic team captain, Kate Walsh, (as well as hordes of reporters and media also in attendance) Middleton flexed some of her old field hockey muscles, and even managed to score a goal…albeit on an empty net, and after four tries, but hey, she’s a Duchess now, so we’ll give it to her!

Kate had asked to join the British Olympic field hockey team as part of her role as Olympic ambassador for the 2012 games, and although her new royal title doesn’t afford her much time to play regular team sports, she admitted that it’s a part of her old life she desperately misses.

“She told me that she missed playing as part of a team,” Kate Walsh said. “She also told me that she used to hit the penalty corners and you could see that. She got low and her shots were really sweet.”

Kate Middleton’s highly publicized visit has shed some additional light on an already growing sport, in both the states and across the pond. But although field hockey continues to gain traction amongst kids and adults, many parents and players are still unsure of the game and the rules. But by far the most complicated, and in turn the most important piece of the puzzle, is the field hockey stick. Although Kate plays with an elite level Adidas X24 Touch stick, it’s important to understand that just because a field hockey stick is more expensive, or more elite, doesn’t mean its right for you! Because field hockey sticks are made with a wide variety of materials, from wood to carbon, they all play differently. Less expensive wooden and composite sticks are less powerful, but are also a lot more forgiving for the new or

developing player. On the other hand, expensive rigid, carbon and fiberglass sticks pack a ton of power in an unforgiving package, perfect for the well-trained, elite player like Kate (Or more accurately, like the 4th ranked British Olympic team). So if you or your daughter wants to play like a Duchess, just remember that you don’t have to spend like one! Look for a stick that works for your game…don’t just think that the most expensive is undoubtedly the “best.”